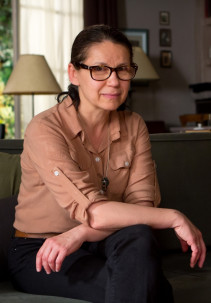 ldikó Enyedi is a leading Hungarian screenwriter and director. She directed four features between 1988 and 1999, including My 20th Century which won the Camera d'Or at the Cannes Festival.

Ildikó Enyedi was born in 1955 in Budapest. She studied Economics and Filmmaking at the University of Budapest and later in Montpellier, France. In the years 1977 to 1985, she belonged to the artist group "Indigo".

Subsequently, she worked at the Béla Balázs Studio – the only independent film studio in pre-1989 Eastern Europe; as well as at the "Studio of Young Artists".

After a number of experimental and narrative short films, since 1989 she has created five feature films that have gained prestigious awards.

With The Magic Hunter and Tamás and Juli, she took part in Competition at the Venice Film Festival in 1995 and 1997. Alongside her feature films, Enyedi made the montage film Geschichten in Gesichtern (Stories in Faces), with which Hungary was presented as guest country at the Frankfurt Book Fair in 1999.

With Europe (2003), she provided – on the occasion of Hungary's entry into the European Union – a short contribution to the film project Európából Európába (From Europe into Europe) by ten Hungarian directors, including István Szabó, Miklós Jancsó and Benedek Fliegauf. Ildikó Enyedi's short film is her answer to the “United Europe" – a humorous game of tag in which the usual roles can all be jumbled up.

It took 18 long years before the director could get her next feature project produced, On Body and Soul. During this difficult period, HBO hired her to direct the Hungarian version of the series In Treatment between 2012 and 2014, and Ildikó also taught at the University of Theatre and Film Arts in Budapest.

Ildikó Enyedi's On Body and Soul (Teströl és lélekröl) was awarded the Golden Bear at the 67th Berlin International Film Festival, and was an outstanding success in cinemas in Hungary and all around the world. On Body and Soul was one of the five Best Foreign Language Award nominees by the AMPAS in 2018.

Member of the European Film Academy and the AMPAS. Ildikó Enyedi was awarded the Balázs Béla and the Merited Artist Prizes, and has received the Republic President’s Order of Merit Cross.

A mother of two, she lives in Budapest and Nordrhein Westfalen, Germany.