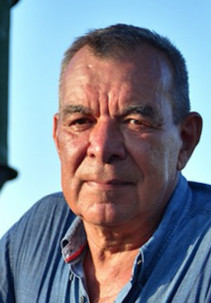 Son of the most known show trial victim, Hungary's foreign minister, László Rajk (1909-1949). Famous in his own right for anti-regime and human rights activities. As an architect, he became the member of the Hungarian avantgarde movement. From 1975 he joined the Democratic Opposition, the underground political movement in Hungary, therefore from 1980 he was black-listed by the authorities and was not allowed to work under his own name. In 1981 he co-founded an independent, underground publishing house, and ran an illegal bookstore from his apartment called "Samizdat Boutique".

His artistic portfolio is full with striking and unconventional built architectural projects and more than 50 film sets as production designer or art director. He was the production designer of Béla Tarr's last two movies (Man from London, The Turin Horse), but did the design for the very first short film of the Academy Award winner László Nemes (With a Little Patient) as well. Worked as partner of Costa Gavras, John Irwin, Miklós Jancsó, Tony Gatlif, Fatih Akin, and he was one of the art directors of Ridley Scott's latest movie, The Martian. As an artist rooted into the avantgarde, he often works for independent movies and projects of early-stage artists.

Rajk believes that every architect should design film sets, firstly because the feedback time is rather than months, and secondly because: 'you learn how to cheat with perspectives, with lines, which is very important....'. This is the aim what he is trying to reach with his students at the University of Theatre and Film in Budapest where he is a professor, teaching film architecture.

2016 – Member of the Szechenyi Academy of Literature and Arts, Budapest