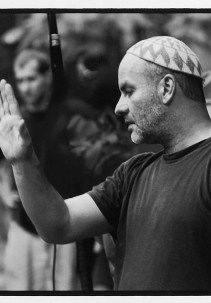 After finishing his studies at the Faculty of Art (ELTE, Budapest), he went on to get a degree in film directing at the Academy of Theatre and Film Art, Budapest, where he graduated in 1988.
His graduation film KIKI AND THE MALES won the Best Direction Award at the West-Berlin Short Film Festival in 1985.

In 1989 he worked as a war-correspondent for Japanese and French television and Radio Free Europe during the Romanian revolution. At the same time he worked together with Károly Makk as script writer and co-director.

In 1990 he made his first feature film PATH OF DEATH AND ANGELS which was screened in Cannes (Sélection Officielle - Un certain regard).

In 1992 he started to work in theatre and became a highly acclaimed theatre director in Hungary.

In 1997 he began shooting THE HUNGARIAN SPECKLED VARIETY, a documentary series, considered by critics as one of the most important documents of the years after the political changes in Hungary.

In 1996 his video film THE GOLDEN DECK-CHAIR won the Best Director Award at the 27th Hungarian Film Week. In the following year it also received the Critics' Award for "its innovative dimensions and forms".

In 1999 his second feature film THE ALCHEMIST AND THE VIRGIN won the Best Independent Feature Award at the Manchester International Film Festival.

In 2001 he made a 25-hour documentary about the life and work of the Hungarian poet György Petri, IN MEMORIAM PETRI GYÖRGY . The very personal interview was led just before the poet’s death.

In 2002 he made his third feature film TEMPTATIONS. At the 33rd Hungarian Film Week it won the Best Director, Best Cinematography, Best Leading Male Actor prizes. It was a Golden Bear Nominee at the Berlinale and went on to win many national and international awards on the festival circuit. The same year, he started teaching at the Academy of Theatre and Film Art. In 2003 he was awarded the Balázs Béla Prize .

In 2007 he completed his fourth feature film DOLINA based on the novel ‘The Archbishop’s Visit’ by Ádám Bodor. It was awarded Best Artistic Contribution Award at the 38th Hungarian Film Week, its international premiere was in the main competition at the 42nd Karlovy Vary International Film Festival, and won several festival awards worldwide.

Kamondi directed his last feature film, JUST DROP DEAD in 2016, he passed away at the age of 55 during the post-production.