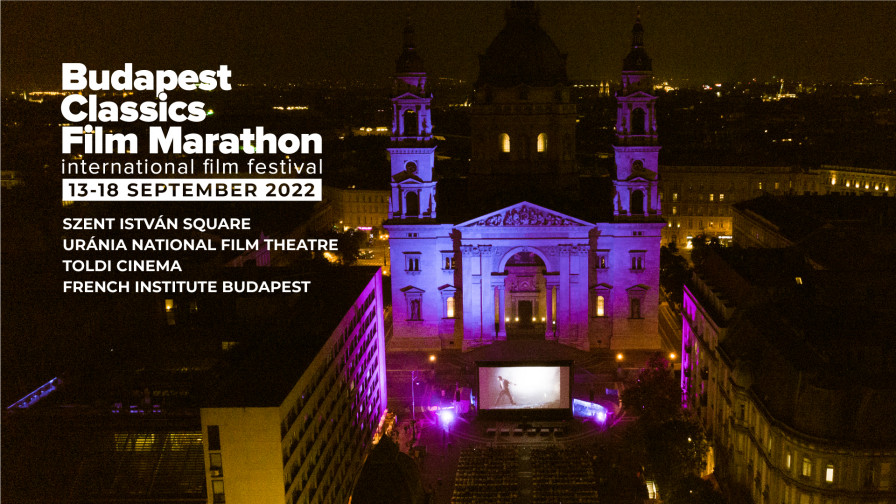 Over six days, visitors to the festival featuring recently restored, popular classics and rarities can enjoy around 100 of the finest films from global movie history. The objective of Budapest Classics Film Marathon (BKFM) is to position the values of Hungarian film in the focus of domestic and international attention, and present the cream of European film heritage to a Hungarian audience. Once again, the highlight of the programme is the transformation of the square in front of St. Stephen’s Basilica into a free open-air cinema on four evenings.

Film Marathon boasts its usual wealth of programmes this year, too. The main theme of the September festival is the Central European roots of Hollywood. The core of the programme comprises works by artists who, setting out from Budapest and frequently with stop-offs in Vienna and Berlin, made it to Hollywood where they became globally famous. The lives of those individuals coming from territories that were formerly part of the Austro-Hungarian Monarchy and exporting Central European culture to America were often just as exciting as the works they created. For this reason, there are lectures on Hollywood Hungarians in the programme.

Sons of Zemplén and founders of Hollywood Adolph Zukor and William Fox, the Oscar-winning director Michael Curtiz aka Mihály Kertész, Vilma Bánky, Béla Lugosi, Miklós Rózsa, Maté Rudolph, Peter Lorre (László Löwenstein), Joe Pasternak, Paul Lukas, the Austrian director legend Billy Wilder who often worked with Hungarians, and Ernst Lubitsch who was of German ancestry and nearly always worked with Hungarians, are just a few of the many who created the golden age of Hollywood, and who used their Central European literary and stage culture as raw material to achieve this. By screening their top movies, Film Marathon evokes those times when Hungarian was regularly spoken in the canteens of Hollywood studios.

Film Marathon selects works to commemorate cinematographer László Kovács, who along with Vilmos Zsigmond was a legendary Hungarian cinematographer of American movies, and who worked on several occasions with the recently deceased director Peter Bogdanovich.

This year, the spotlight is not only on cinematographers but designers, too. Audiences can get acquainted with the art of Oscar-winning Sándor Trauner (Alexandre Trauner), who worked in France and Hollywood with directors such as Marcel Carné, Billy Wilder, Fred Zinnemann, John Huston, Anatole Litvak, Orson Welles and Luc Besson.

Once again BKFM celebrates several anniversaries in the Hungarian film history section: Ferenc Szécsényi and Sándor Pécsi would have been 100 this year, István Eiben was born 120 years ago, this is the 150th anniversary of Jenő Janovics, pioneer of Hungarian filmmaking, and Pannónia Film Studio was established 65 years ago.

The Open Archives section is back, featuring the latest discoveries from the world’s film archives, we have not forgotten student screenings and silent films with live music accompaniment, plus there is a block in which students have compiled the programme. As is now a tradition, there is also an international film industry programme, the focus of which is film education.

The organizers are offering 2000 free accreditations to students while residents of Budapest’s 5th district will have specially reserved seating for the St. Stephen’s Square screenings and programmes at Toldi cinema.