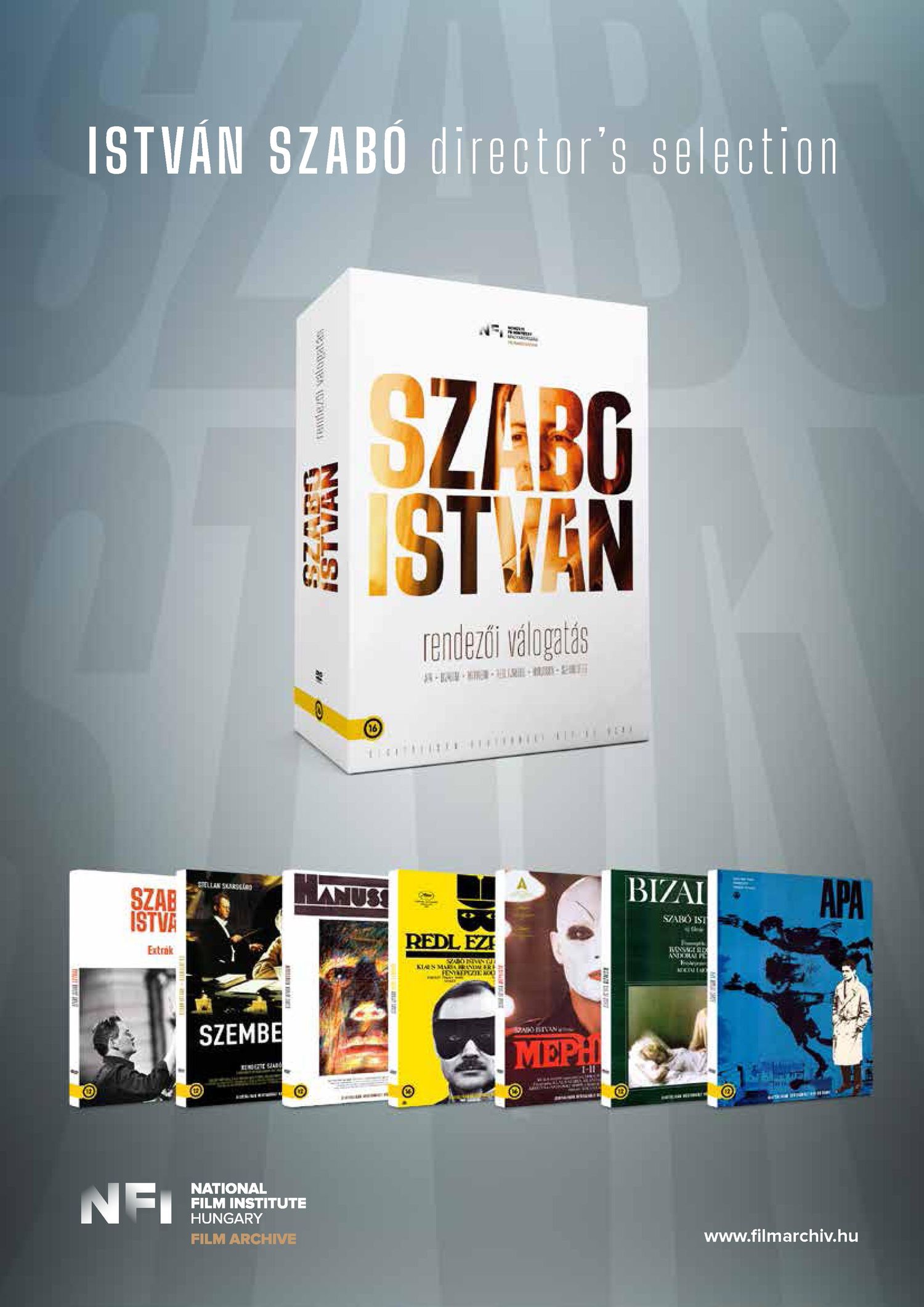 Oscar-winning István Szabó is the most internationally acclaimed Hungarian filmmaker since the 1960s.

After graduating from the Academy of Drama and Film in 1957, he became a founding member of the Béla Balázs Stúdió. He gained worldwide recognition with his lyrical film You. His first feature film, Age of lllusions, came out in 1964. Working in the tradition of European auteurism, most of his 17 films represent many of the historical and psychological conflicts of Central Europe’s recent history as well as of his own personal history. His flashback and dream-styled films (Age of lllusions, Father, Love Film) led him to become
a well-known director of Hungarian ‘new wave’ cinema. Besides feature films, he has also directed several poetic films about Budapest (Budapest, Why I Love it, 1971). These are plagued by thirty years of dream-history and loss, including World War II, the communist dictatorship and the uprising of 1956.

He achieved his greatest international success with Mephisto (1981), which, along with three other films, were nominated for Academy Awards (Confidence, Colonel Redl and Hanussen). The first of the three won a Silver Bear at the West Berlin Film Festival and was the first to be nominated for an Oscar, in 1980. Szabó’s films have in total won almost 40 awards all over the world: Mephisto winning the Academy Award for Best Foreign Language Film. Best Screenplay Award and the FIPRESCI Prize at Cannes, all in 1981, followed by the National Board of Review Award for Best Foreign Language Film from New York Film Critics and the David di Donatello Award in 1982; Colonel Redl winning a BAFTA Award in London in 1987; and Hanussen being nominated in 1988 for a Felix Award and a Golden Globe Award, amongst others. After his ‘Klaus Maria Brandauer trilogy’, Szabó continued to make international co- productions, filming in a variety of languages and at several European locations. Some titles include Meeting Venus (1991), Sunshine (1999), which won three European Film Awards, Taking Sides (2001), Being Julia (2004) and The Door (2012).

“From the aspect of directing technique and storytelling, I consider Colonel Redl my best film, but Father is dosest to my heart.” Szabó always refers to Father as being his most successful film of the early period as well as his personal favourite.

Szabó became world famous after making his first films, known as the ‘upbringing novels’ about his generation’s coming of age. Age of lllusions (1964), Father (1966) and Love Film (1970) are characterised by light, lyrical passages shot with a hand-held camera and a collage-like structure in great walks and conversations, evocations of the past revealed in flashback, and visions. András Bálint, the protagonist, could be seen as the director’s alter ego.

Szabó’s father lost his life immediately after the liberation of Budapest. “At least 60% of my classmates grew up without a father” he has declared in several interviews. In other words, the film speaks about the trauma of an entire generation and of being orphaned, and about how Takó and most probably the other children in the film try in their own way to process this loss. Takó uses his father’s favourite, everyday objects to create a legend around the person: a heroic partisan, a resistance fighter hiding the persecuted in hospitals, a famous doctor or an inventor of a revolutionary new sedative. Indeed, he sees the image of his father in banners of the ‘wise leader’ held aloft at a Mayday parade. However, during the shift to adulthood, the protagonist slowly rids himself of this myth-like image. The camera, jumping between past and present and reality and fantasy in subjective passages through flashback etudes, shows love, the siege, fascist Arrow Cross party members, the Holocaust, Stalinism, 1956, historical role switches and numerous taboos.

“Szabó is especially good in his brief, sketch-like notations, either real or imagined, in which the boy recalls or constructs his father’s past. This is real, solid, moving yet unsentimental stuff, and it’s beautifully illustrated as well by Sándor Sára’s camerawork.” (Bob Hawkins, Variety, July 1967).

The first of Szabó’s films to be nominated for an Oscar led to the globally successful ‘great trilogy’. In the wake of the visions of 25 Fireman’s Street and the allegory of Budapest Tales, Szabó executed a dramatic turn in his career. Featuring Péter Andorai and Ildikó Bánsági in the lead roles, Confidence is set at the end of the Second World War and offers viewers a Kafkaesque sketch of the love affair between two complete strangers thrown together and in hiding by force of circumstance. In a fetid atmosphere of mistrust, all the while terrified of the Gestapo, the couple has to experience complete vulnerability whereby they are compelled to live together as husband and wife using forged papers. The woman finds it difficult to get used to the constant concealment and subterfuges, although the initial mistrust gradually develops into a genuine attraction between the two, up until the end of the war separates them.

The style of Confidence was completely new in comparison to earlier films. The depiction is bare and linear, with an external point of view. The film works primarily with close-ups, and viewers are solely in the story’s present, in the backstage of a chamber drama.

Based on Klaus Mann's novel of the same title, the film attempts to answer the eternal Faustian question: how is personality shaped under the weight of history in central Europe? The career of the extraordinarily talented and ingratiating actor Hendrik Höfgen is soaring in 1930s Germany. And Klaus Maria Brandauer, who played in Mephisto with extraordinary talent, went on to depict two similar parts in the title roles of Colonel Redl (1984) and Hanussen (1988). In these actor-soldier-seer figures who fall one after the other, Szabó expresses - in European perspectives - why, when and what sort of characters totalitarian systems need to carry out their objectives.

“The actor is played by Klaus Maria Brandauer in one of the greatest movie performances I've ever seen. Mephisto is not a German but a Hungarian movie directed by the talented 44 year old who has led his country's cinema from relative obscurity to its present position as one of the best and most innovative film industries in Europe...” (Roger Ebert)

Alfred Redl, who from a modest Ruthenian railway family rises to become a colonel in the monarchy, penned poems extolling the ruler, already as a child. He is especially attracted to his aristocratic fellow student, the Hungarian Kristóf Kubinyi and his sister Katalin. He wants to be like them; to do so, he erases his past and his family from his memory. His excessive humility and the compulsion to forge a career and result in him going along with power plays to the point even of sacrificing himself just to save the agonising monarchy that is on the threshold of the outbreak of hostilities.

“At the centre is Klaus Maria Brandauer (Szabó's Mephistoj delivering a dazzling, virtuoso performance and only upstaged, at the proper dramatic moment, by Armin Mueller-Stahl's cruelly subtle performance as the Crown Prince.” (David Robinson)

The Austrian Klaus Schneider, who later comes to be known as Erik Jan Hanussen, is wounded during World War I. While recovering in the care of Dr Bettelheim, the doctor discovers that Schneider possesses emphatic powers. After the war Schneider changes his name and performs in halls and theatres as a hypnotist and mind reader in Berlin - where Nazis also notice his abilities...

“In fact, Hanussen is the first figure in the Szabó trilogy who in the interests of staying safe is not prepared to completely compromise himself to the demands of the age, but instead he tries to remain faithful to his personal sensibility and visions - and this in turn leads to his downfall.” (György Báron)

In the wake of the worldwide success of the great Central European trilogy, Szabó was given the opportunity to work on big-budget international co-productions and with big stars such as Glenn Close, Ralph Fiennes, Jeremy Irons, Harvey Keitel and Helen Mirren as lead actors in his films. This chamber work, based on the stage play by Ronald Harwood and completed as an Austrian-French co-production, is a fascinating intellectual counterpart to Mephisto; it is like seeing into Mephisto's post-war fate. The film's opening and closing scenes are a typical Szabó solution: the conducting of Beethoven's ‘Symphony No. 5', which exposes the Faustian issue and the bargain struck between art and power. Archive
footage shows that after the concert Göbbels takes Furtwängler's hand (just as the Marshal patterned on Göring does with Mephisto patterned on Gustav Gründgens) and the embarrassed conductor (in slow motion!) wipes his hand.

“Szabó floats: he does not give lessons, but he induces empathy and teaches consideration. The historical challenge, this fateful factor dressed as success, a deal, prosperity, similarly appears in this film. We see the awakening of a person facing the consequences of his decision, who suddenly realises to what sort of game he has fallen victim.” (Tamás Halász)

This article was originally published in the Hungarian Film Magazin – The 2020 Berlinale Issue pp 16-19.