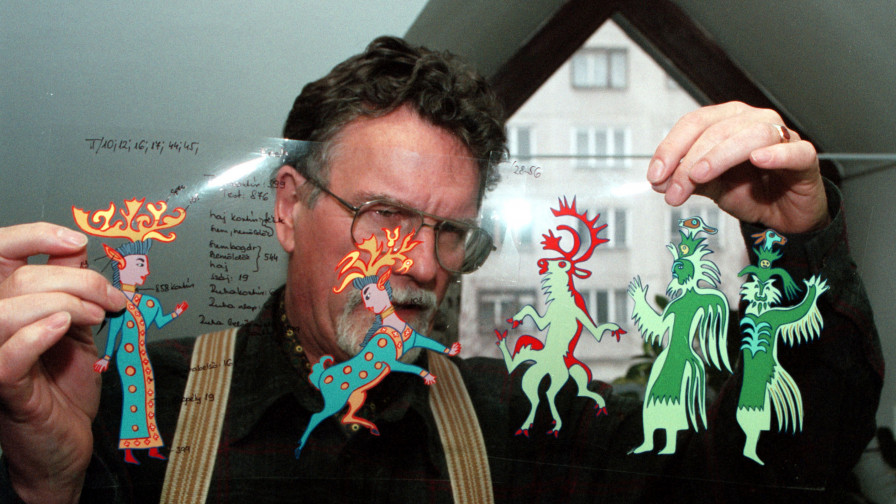 The Palme d'Or winner and Oscar nominee animation film director, Marcell Jankovics has died aged 80. Over the course of a career that spanned six decades, the filmmaker worked on more than 100 films as director, figure designer and animator.

Over the course of a career that spanned six decades, the filmmaker – who was honoured with the Kossuth Prize and Artist of the Nation award – was involved with more than 100 films as director, figure designer, animator and specialist.

The film director, graphic artist and culture historian born in 1941 was just 19 years old when he joined the animation department of Pannónia Film Studio in 1960. During the 1960s, he was the figure designer of Gusztáv, one of the most iconic Hungarian cartoon stars, and co-director of the series. He directed the first full-length production in Hungarian animation history, János vitéz (Johnny Corncob) in 1973.
His second feature film, Fehérlófia (Son of the White Mare) was selected amongst the 50 most important animation films of all times at the animation Olympics organized to coincide with the Olympic Games in Los Angeles in 1984. One of the most famous animation films in the world, the 2-minute-long Sisyphus, is one of his shorts with streamlined design. It was nominated for an Oscar in 1976. Küzdők (The Struggle) won a Palme d’Or in Cannes in 1977. Series hallmarked with his name (Magyar népmesék /Hungarian Folk Tales/, 1977–2012; Mondák a magyar történelemből /Legends from Hungarian History/, 1986) are unique reworkings of the values of centuries of Hungarian culture. Only one thirty-minute episode (Teremtés /Creation/) of his unfinished Bible film was completed in 1989, on the basis of which it is no exaggeration to state that the planned series could have been one of the pinnacles of the oeuvre.

Testing the boundaries of the possibilities of animation film (source: MTI)

Ének a csodaszarvasról (Song of the Miraculous Hind, 2002) dealing with the history of the Magyar Conquest was one of the most watched animation movie films in Hungarian animation history after the change of regime. As a culture history educational film, it tested the boundaries of the possibilities of animation film, as did the most grandiose undertaking of Jankovics’s career, Az ember tragédiája (The Tragedy of Man, 2012), an animated adaptation of the poem of humanity by Imre Madách. His final work was the animation adaptation of the epic poem Toldi (2021) by János Arany He made it on the commission of Kecskemétfilm. It is expected to debut this autumn.

The 4K restoration of Fehérlófia was carried out as a collaboration among Arbelos Films of Los Angeles, the Hungarian National Film Archive and Hungarian Filmlabor in 2019. Currently, staff of the National Film Archive and Filmlabor are working on the restoration of his third full-length animation film, Ének a csodaszarvasról. Fehérlófia and János vitéz are once again being shown in the United States, Canada, Germany and France thanks to the international distribution of the Film Archive, Cinématheque française in Paris has screened them and the Annecy International Festival is including them on its programme this year in the section presenting restored film classics. In 1984, he laid out his creative creed to the periodical Filmkultúra thus: ‘I escape to topics that preoccupy the basic canons of civilization. The fact is, I simply have nowhere else to escape to. My personal problems are not so important that I would make a movie out of them. I can’t see that point in the world, that are thousands, millions of times more important, that would be worth dealing with in our genre: there is such an immeasurable scale of problems that surround our world. Rescuing our disintegrating values is at least a beautiful task, somehow to restore in our genre.’ In relation to the cinema release in America of his restored classic Fehérlófia, last autumn we had the opportunity to speak with the artist about his career and the ars poetica of his films. It was an honour to work with him on preserving and promoting his oeuvre. He collaborated with the staff of the Film Archive and Filmlabor on the restoration of his films. He was extremely happy about the fact that over the past few years we took his restored films everywhere from Japan to America and arranged their redistribution. Last autumn, we had a major interview with him covering his life and work. We never saw him so open and generous in his earlier statements. Marcell Jankovics, dear friend, may you rest in peace.