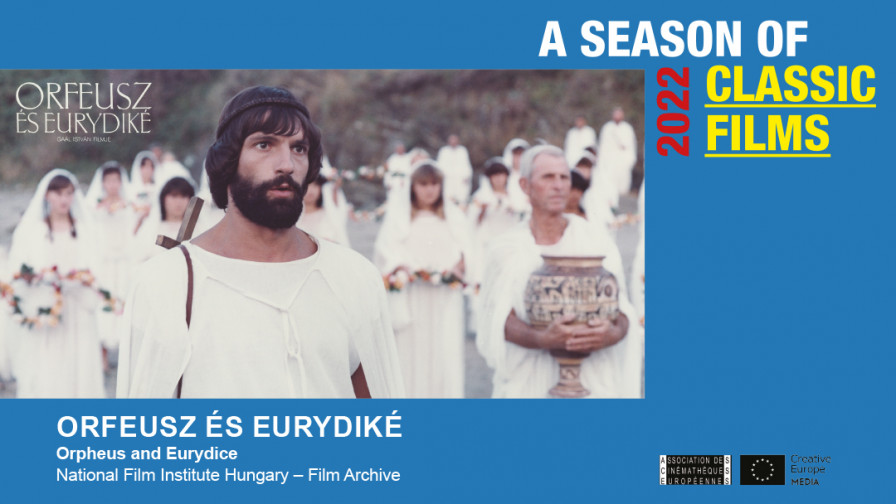 This year, the Hungarian National Film Institute (NFI) presents the recently restored opera film Orfeusz és Eurydiké (Orpheus and Eurydice, 1985) as part of the European project A Season of Classic Films. Enikő Eszenyi and Sándor Téry star in István Gaál’s version of the mythological work. The premiere is being arranged in the upgraded screening room of the Film Archive on 21 December, the winter solstice. It can then also be viewed by the general public online for an entire week between the two holidays. The projection is free of charge but registration is required.

With his final cinema piece made in 1985, István Gaál not only set Gluck’s iconic opera to film but he transformed it into an incisive auteur movie through rich visual images and intense symbolism. He portrays Orpheus not as a hero of mythology but rather as a fallible, struggling human who is confronted by the mystery of death. Sándor Sára was cinematographer on this spectacular film.

It ranks among the classics of auteur opera films alongside Ingmar Bergman’s The Magic Flute and Joseph Losey’s Don Giovanni.

The movie Orfeusz és Eurydiké was made on the basis of the Vienna version (1762) of the opera that concludes in tragedy. However, Gaál made radical changes to the Gluck work: his Orpheus sings not in a castrato tenor or alto but instead – in line with ancient Greek mythology – in a masculine baritone, sung by Lajos Miller. Eurydice is sung by Maddalena Bonifaccio, Ámor by Veronika Kincses, while the part of Orpheus is played by Sándor Téry, Eurydice by a youthful Enikő Eszenyi and Amor by Ákos Sebestyén. The Franz Liszt Chamber Orchestra and Hungarian Radio and Television Choir, conductor: Tamás Vásáry, provide musical accompaniment.

Both film presentations are realized within the framework of the international project A Season of Classic Films organized by ACE (Association des Cinémathèques Européennes – Association of European Cinematheques) and sponsored by Creative Europe. The objective of this international project is to promote the digital restoration of gems of European film art and, by ensuring their widespread presentation, to draw attention to the work of European film archives.

In 2021, the NFI – Film Archive showed György Kovásznai’s animation cult movie Habfürdő (Bubble Bath) in the frame of the project. This year, it is making István Gaál’s recently restored opera film available on the big screen and online.

More on A Season of Classic Films