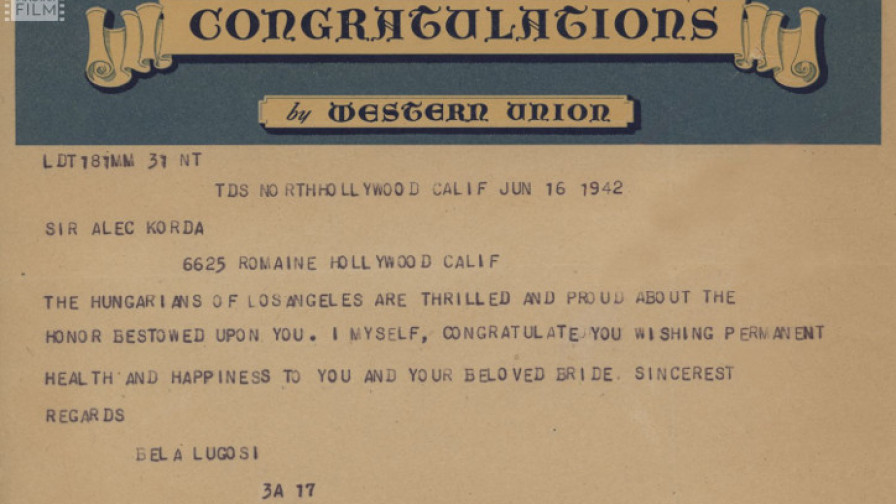 The collection of the Film Archive includes a remarkable congratulatory telegram that famous Hollywood actor Béla Lugosi sent to director-producer Sándor Korda, that is, Alexander Korda, on him being knighted. The document of just a few lines is little bigger than a postcard yet it reveals much about the ties binding Hungarian émigrés in the film industry in the 1930s and 1940s, while it also nuances the picture we have of Béla Lugosi, famous for his characterization of Dracula.

The Hungarians of Los Angeles are thrilled and proud about the honour bestowed upon you. I myself, congratulate you wishing permanent health and happiness to you and your beloved bride. Sincerest regards

The paths of Korda and Lugosi touched at several points and although the actor never played in a film made by Korda, they followed each other’s career with particular attention. Béla Lugosi was born Béla Ferenc Dezső Blaskó in Lugoj (Hungarian: Lugos) in what is today Romania on 20 October 1882. He launched his career as a stage actor, appearing in Subotica, Timisoara and Debrecen. Initially he contracted with the Szeged National Theatre and from here he transferred to the company of the National Theatre in the capital in 1913. His first film roles date from 1917: initially, under the stage name Arisztid Olt, he appeared in works by director Alfréd Deésy, including the first film dramatization of the famous womanizer Casanova, and then in silent films by Mihály Kertész: Lulu, 99 and Az ezredes (The Colonel). At the time, Sándor Korda was head and principal director of Corvin, the biggest film factory in Budapest, where work was conducted in the most modern studio of the age. The two men most certainly knew each other and it is highly likely that they met regularly in the busy cafés of Budapest and at social events. In 1919, both accepted positions in the filmmaking institutions of the short-lived Republic of Councils and both fled the country ahead of reprisals after the collapse of the regime. Under the Republic of Councils, Korda was artistic director of film production as a member of the Directorate, while Lugosi was founder of the trade union of actors. In 1919, both Korda and Lugosi narrowly escaped arrest in Hungary. They initially went to Vienna, from where they moved on to Berlin and eventually the United States. Lugosi was already in New York in 1920, while Korda followed him a few years later, in 1926. New York was the centre of stage life and a good starting point for Lugosi. He became acquainted with local Hungarians and organized a company made up of émigré actors living there, which then toured cities with large Hungarian communities. In 1922 he appeared on Broadway, and in 1927 he played the title role in the stage adaptation of Bram Stoker’s Dracula.

The performance was a big hit and soon thereafter, Universal offered Lugosi a contract. He went on to make film history as the immortal vampire figure in Tod Browning’s film in 1931. From this moment on, Lugosi became the charismatic star of a whole series of horror films and relocated to the centre of the film industry on the west coast.

In Hollywood, the restless actor rapidly became a key figure of social life but he preferred intimate dinners with friends to glittering Hollywood parties. Among American-Hungarians working in the film industry, he was particularly close to violinist Duci Kerekjártó, producer Joe Pasternak, fellow actors Ilona Massey, Paul Lukas and Victor Varconi, writer Menyhért Lengyel, and director Michael Curtiz (Mihály Kertész). Menyhért Lengyel recalled one of the cheerful evenings they spent together thus: “The Lugosis hosted a dinner — pork sausages in traditional Transylvanian style, and I can say that I never had better, tastier, more attractively presented and more irresistible delicacies even in Hungary, despite having spent much time in the countryside where the annual pig killing dinner was a big event. This was all served with Hungarian wines — and it was interesting that Béla chose the renowned sulphurous medicinal water shipped all the way from Parád in Hungary, which he drank during the day, being convinced that it was extremely beneficial for the body. Mihály Kertész was also there at the dinner, his estate being nearby; he came across attracted by the great ‘pigginess’. We sang Budapest hits that were in fashion 30 years before. Miska (Michael Curtiz) and Béla sang operetta duets and danced together.” Lugosi was an important organizer for the 10,000-strong Hungarian community in Los Angeles and from the 1930s he became its leader. He regularly appeared at various cultural events and as a huge football fan he undertook a role in sport financing. He sponsored the Magyar Athletic Club team and from 1935 he was elected honorary president of the Los Angeles Soccer League. He founded the William Campbell Memorial Trophy, which is also known as the Bela Lugosi Trophy. When on 13 December 1941, just six days after the Pearl Harbour attack, Hungary declared war on the United States, Lugosi unequivocally denounced fascism. He promoted war bonds and organized charitable events in the Hungarian community in Los Angeles, during which he raised considerable sums for the Red Cross and – as would be expected of a true Dracula – he also donated blood.

Korda, a director of more European tastes, simply couldn’t find his place in Hollywood, his relationship with his wife, the beautiful and strong-willed actress Maria Corda, irretrievably broke down, which is why after shooting just a handful of movies on American soil he returned to Europe in the late 1920s. He finally found his true home in London, where he set up London Films and built his famous studio in Denham. He received British citizenship in 1936 and in the summer of 1942 he was knighted by King George VI for services to the British film industry and revitalizing national filmmaking. He was the first filmmaker ever to receive this honour, which he won at least as much for his active participation in the struggle against Nazism as for his professional activities. Korda films, primarily Lady Hamilton (1941) starring Vivien Leigh and Laurence Olivier, played a major role in reviving sympathy amongst Americans for the British and persuading them to enter the war against Hitler’s Germany. Furthermore, it was by no means irrelevant that during this time the New York offices of Korda also served as a base for British intelligence.

So it is evident that both Lugosi and Korda were thinking similarly about the war raging in Europe and although Korda worked primarily out of London during the 1930s, his productions tied him to the United States in a thousand different ways. One of the symbols of these ties is the telegram, behind the congratulatory words of which one can detect two hard-fought careers, a world war, the community of émigré Hungarians and its network of contacts spanning several countries. The ‘beloved bride’ mentioned in the telegram had in fact been Korda’s wife since 1939, the British actress Merle Oberon, who became Lady Korda after her husband’s knighthood.