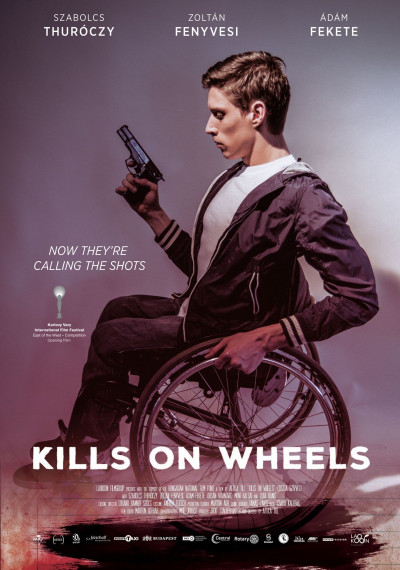 This is a meaningful action-comedy of a wheelchair-bound assassin gang.
Driven by despair and fear of becoming useless, a 20 year-old boy, his friend, and an ex-fireman offer their services to the mafia.
But things are not what they seem.
The boundaries between reality and fiction blur and the story becomes a whirling kaleidoscope showing us gangsters and gunfights, but also the challenge of life in a wheelchair and the pain caused by a father’s rejection.

Director’s statment
I have met several people in wheelchairs while I was volunteering with the disabled. These personal encounters inspired me to present a story about a wheelchair bound boy who is struggling with his own identity as much as with his environment and he finds a way to cope with life’s challenges in his own extreme fantasy world.
It was crucial to me to make a movie about disabled people where they finally aren’t played by actors, but they get the opportunity to act themselves and be the real heroes.

Roger Ebert Award – 2016 Chicago IFF
“Attila Till’s genre-mashing and certainly surprising Kills on Wheels takes us through the looking glass into the world of handicapped assassins. A highly entertaining dark comedy and action-thriller, the film is distinguished by the equanimity with which it treats its protagonists, who are rarely seen on the silver screen. This is a movie with cojones.” Jury

Special Jury Prize – 2016 Luxemburg CinÉast
“a surprising combination of genres, a fusion of drama, crime story, action and comic film that subverts expectations and stereotypes. It is an unexpected story populated with rich and touching characters who, to an extent, highlight themes and situations they themselves are confronted with in real life, making audiences laugh, cry and think about serious issues as well.” Jury

FIPRESCI Prize - 2016 Filmfestival Cottbus
"Kills on Wheels may be the most clever, inspiring, unexpecetdly deep and likeable film in competition at the Filmfestival Cottbus. The way Attila Till, script writer and director, portrayed the serious - and necessary - topics that lie at the base of the movie, covering them with such an enjoyable layer of cheerful but bittersweet feel and genre mixture between criminal thriller and balck comedy, make his second feature film the perfect excuse to approach Eastern European movies without pre-established prejudices.
Kills on Wheels is touching, entertaining, rough, fun, and proves that Eastern Europe can offer worldwide audience some fresh air in the form of blockbusters that can put against the ropes any Hollywood production." Jury