Tales from the Lakeside
(Lengemesék) 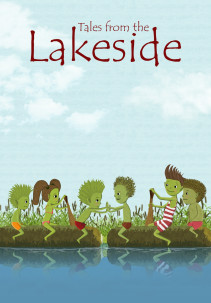 Tales from the Lakeside are based around the four seasons. The series opens with Spring, where we are introduced to the world of warblers, frogs, swans, Grimps, and, of course, the Verdies, living in the glorious green rushes. The Verdies are dedicated defenders of this quiet corner of the world and protectors of its many forms of flora and fauna. Verdies’ bodies are little larger than dandelion heads, their skin gleams green like the reeds and rushes they inhabit, and their hair is brown, but in some cases green as we will see as the story unfolds. It is here that we first meet Willy Whistle, the daring young Verdie with a heart of gold. Packed with plenty of humour and lots of lessons to be learned, we follow young Willy on his adventures as he does battle with the menacing Grimps, helped as always by his Verdie pals and dear old Grandpa. Summer sees the scene shift to warmer weather, with fun and games in the welcoming waters of the lake. Life abounds as ducklings hatch, spiders spin their webs, and warblers swoop through sunny skies, giving the ever vigilant Verdies plenty of work to do. But along with so many friends come a few foes in the form of a sneaky water snake, a gang of rowdy frogs, a predatory swan, and , as always, those nasty Grimps. Willy has his work cut out manufacturing a motor and buildings boats, and is constantly called upon to defend the rushes and quash dastardly plans by the Grimps to rule the lake. But, thanks to his brains and bravery, peace is once again restored to the rustlings rushes and their happy inhabitants.