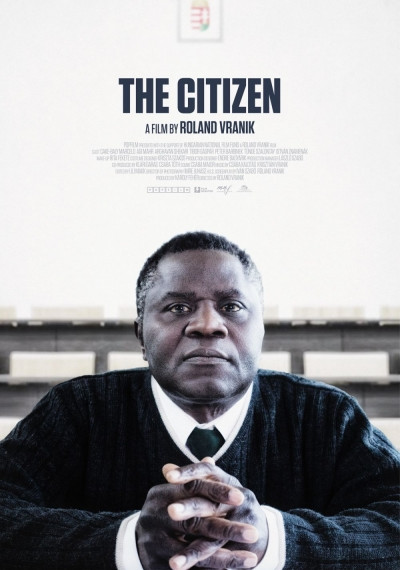 Award-winning Hungarian director Roland Vranik's third feature film considers the many nuances of integration through the means of an unorthodox love story The Citizen follows Wilson, who, after losing his entire family to the horrors of war and making the perilous journey to Europe as a political refugee, settles for a sedate life as a security guard in a Budapest shopping center. However, Wilson is driven by a quest: to become a model Hungarian citizen and to do so at any cost.

With a script co-written by the acclaimed writer and fellow Hungarian Iván Szabo, The Citizen poignantly dwells on some of the most complex issues of modern society. With Spartan use of technology, a naturalistic and pared-down mise-en-scene and by employing mostly unprofessional actors, director Roland Vranik emphasizes the complexity of human emotion and lets the universal vulnerability of the heart mirror the equally universal vulnerability of humanity.

The Citizen deals with the difficulties of integration through a love- and refugee story. The movie depicts the drama of three people living in contemporary Budapest with minimalist tools, focusing on the story and the actors; although the film’s genre is essentially drama, it doesn’t lack humor.

Wilson (56), an honest, good-hearted African man has been living in Budapest for several years. He came to Hungary as a refugee, but since then he has found a home and job for himself; he works as a security guard in a supermarket. He wants to become a Hungarian citizen; however, he repeatedly fails the basic constitutional studies exam. His life takes an unexpected turn when his colleague recommends her sister, Mari (56) to him; a teacher specialized in Hungarian and History.
During their private lessons a mutual attraction unfolds between the married teacher and her student. Meanwhile, one night, a mysterious stranger appears at Wilson’s doorstep: Shirin (26), a Persian girl. The same night, Wilson is forced to take a stand when the pregnant woman’s water breaks but refuses to go to a hospital, because she was facing expulsion before she fled the refugee camp to avoid it. With Wilson’s help, Shirin gives birth to her daughter, Hidi, in Wilson’s apartment. The birth forges a strong, trusting bond between the two refugees.
Shirin, hiding at Wilson’s place, can only avoid expulsion if a Hungarian citizen married her. Hoping that with Mari’s help, Wilson will be able to pass his next citizenship exam, he promises Shirin to marry her on paper.
Complications arise after Wilson successfully passes the exam and takes his relationship with Mari to the next level. Mari leaves her husband and family and moves to Wilson.  However, Shirin’s true status is kept hidden from Mari, and once everything comes to light, Mari gets increasingly frustrated by Wilson’s loyalty to Shirin and her baby Hidi, who are entirely dependent on Wilson. Although the idea of a romantic relationship has never occurred between the two refugees, Mari is getting more and more jealous of Wilson’s paternal and grandfatherly feelings and demands a separate life for the two of them, without Shirin and her newborn. To make matters worse, a successful exam in itself doesn’t automatically guarantee the citizenship, thus an independent life seems to become more and more distant and elusive. Because of his loyalty and paternal feelings towards Shirin, Wilson is unable to make a decision that would please Mari too. When the situation gets increasingly tense and hopeless, Mari makes a desperate move: she betrays Shirin, who gets deported from the country, along with her baby.
However, Mari didn’t achieve what she wanted to, on the contrary: Wilson breaks up with her for good because of what she did. Wilson, deeply disappointed, gives up on his dream for becoming a Hungarian citizen; he packs up his life and moves to Austria, in hope for a better life.