The National Film Institute provides financial and professional support for the following types of applications for full-length feature films, documentaries and animations.

-        Production (support is given for Hungarian live-action- , animation- and documentary features primarily intended for cinema release; a detailed budget and complete script is required for application) Other types of applications include 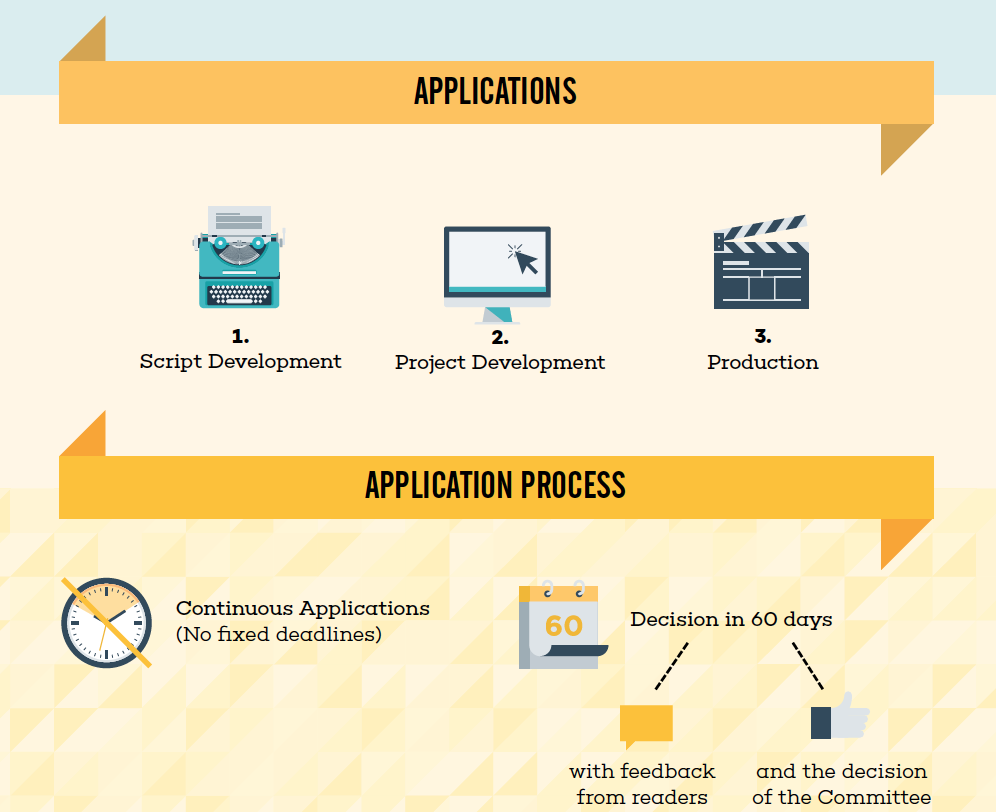 When is the applicant informed on the result of his application?

Within 60 days following the date of submission of the application (that can be extended in justified cases, particularly in case of missing documents) the National Film Institute informs the applicant in an e-mail.

In case of a feature length documentary film, what is the script or project description required by the Film Institute?

If an applicant would like to submit an application for the production of a documentary film and the submission of a detailed script is not possible, they have to provide a project description that should contain the following:

If the applicant submits a script but it does not contain all the above information, the script should be accompanied by the project description. It is also possible to apply for project development support with a script, a treatment or a synopsis. The synopsis should always be attached to the script and treatment.

What is the process of the evaluation of the applications?

1) Production companies or other eligible individuals (writers, producers, director-writers) submit their applications to the National Film Institute, online. Decisions are made in 60 days after submission.
2) Synopses, treatments or screenplays are received by the Head of Development, who distributes these documents to readers, the Development Team and the members of the Decision Making Board.
3) After reading and evaluating the submitted applications readers send their reading reports back to the Head of Development and the 4 member Development Team.
4) The Development Team adds the development comments to the reading report.
5) The Head of Production evaluates the financial and production information of the project.
6) These reports are sent to the 5 members of the Decision Making Board who read all submitted materials.
7) At the meeting of the Decision Making Board all scheduled projects are presented by the Head of Development. All members make their comments and vote. Decisions on support are made according to majority vote.
8) Decisions are published on the website of the National Film Institute, applicants are notified via e-mail accompanied by the readers’ reports within 10 working days.

Who decides on the applications submitted to the Film Institute?

What about first films?

A filmmaker with their first film is not entitled to apply without a producer who has got proper references.
Producer students attending state institutions of higher education in filmmaking acquire the required references with their diploma films or examination films.

How many applications can be submitted by an applicant?

What are “proper” references?

At least one film released in a Hungarian film theatre that can be a feature fiction film, a documentary or an animation film.
At least one film invited to an “A” category international film festival either in competition or in any other sections, or a film at important film events qualified as a nominee (see Regulations of Funding, Annex No.2).

How can you apply?

What regulations should the applicants respect?

Applications are continuously open for the support of script and film project development, for pre-production and film production as well as marketing (distribution).

In case of applications for the support of script or film project development, film production, pre-production or marketing (distribution) the applicant can be

2, a private individual (only for script or film project development)

An applicant who does not have proper references may only submit an application together with an applicant who has the required references.
A support agreement for pre-production and film production can be only concluded if a project company is established in Hungary solely for the purpose of the production of the supported film. In case of international co-production, the applicant can be exempted from the establishment of the project company, if the Hungarian contribution to the budget is less than 50% and the support for film production is less than 200.000 EUR.
Even if the application was submitted by a private individual for script or film project development, the support agreement can be concluded only with a company.