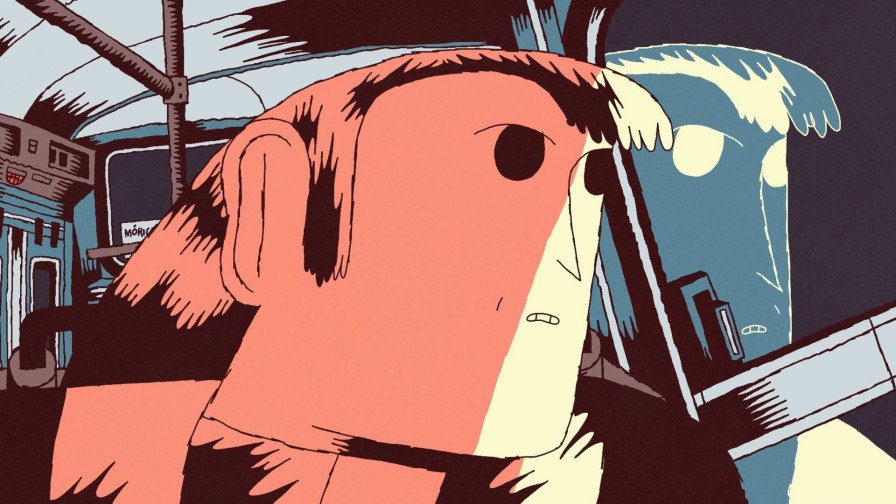 A meeting of the eyes in Budapest at the Berlinale

Domonkos Erhardt’s animation The Corner of My Eye has been invited for the 73rd Berlin International Film Festival set to open on 16 February. Produced at the Animation department of Moholy-Nagy University of Art and Design with support from the National Film Institute, it will world premiere in the Generation 14 plus section of the Berlinale, considered to be one of the world’s most prestigious film festivals.

The short film brilliantly capturing the atmosphere and showing flashes of the scenery of the Hungarian capital focuses on the moment when the lives of two people previously unknown to each other become intertwined as their gazes connect. On the bumpy bus ride home to his girlfriend, a boy spots a nice girl sitting on the opposite side and feels embarrassed by the situation. Their eyes only meet in the reflection of the glass, and the boy, though just in thought, gives in to temptation and pictures what it would be like to be with this girl.

As Domonkos Erhardt said about his diploma work, he wanted to tell a story without the description the situation or the setting taking up too much of the screentime. “The film is a chamber piece whose action takes place on an old Ikarus bus, and so the portrayal of the mundane takes the central stage. In addition, I like playing with the proportion of what is told and what is left untold. This way, the viewer is invited to fill in the blanks using their own thoughts and experiences, making the story even more personal.”

The last animation from MOME Anim shortlisted for the animation short section of the Berlinale was Flóra Anna Buda’s diploma film Entropy in 2019, which received the Teddy Award. The Generations section featuring youth and children’s films first included a Hungarian work in 2017 in the form of a 9-minute digital animation by Anna Katalin Lovrity, also from MOME Anim.

Autumn 2023 will mark a new chapter in the history of MOME Animation, which has seen huge success in recent years. From that point on, the internationally competitive animation programme will continue in English language and offer additional specialisations, such as Animation Direction, Game Design, and Immersive Storytelling.

“The debut of the film at the Berlinale is a major success not only for the young artist, but also the entire Hungarian animation. Thanks also to the support provided by the National Film Institute, each year our diploma films enjoy great success at the world’s most prestigious film festivals, demonstrating that MOME’s animation community is one of the strongest creative workshops in the region”, said Rector and animation director József Fülöp.

The film score was created by Some Nóvé. The editor of the film was Judit Czakó and the producer was József Fülöp.