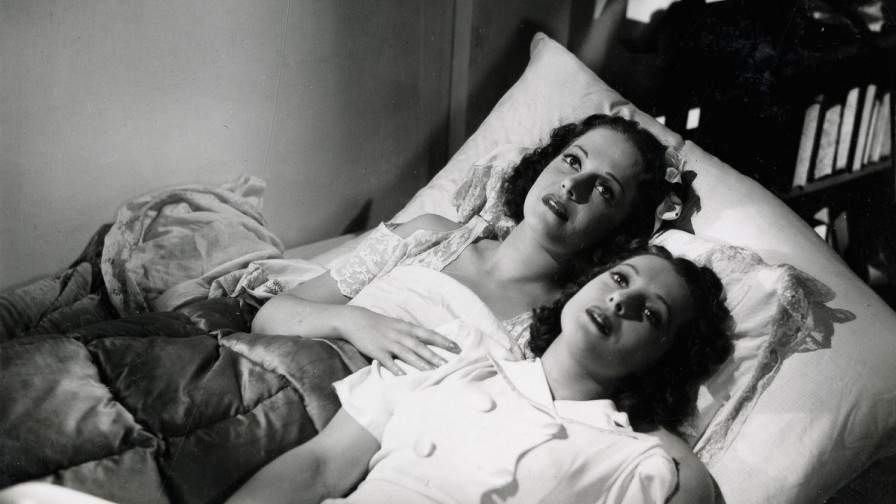 He was not yet called ‘André De Toth’, but ‘Tóth Endre’, in the Hungarian style, and had not yet been nicknamed ‘the last one-eyed man in Hollywood’, celebrated by Bertrand Tavernier, but this young son of a film-loving bourgeois was born in 1913 in southern Hungary. After an ill-fated experience as theatre writer, he was taken under the benevolent wings of playwright Ferenc Molnar and poet Mihaly Babits. Thanks to them, he visited the Hunnia studios in Budapest and immediately made himself irreplaceable. He continued his apprenticeship by travelling from London, where he lent a hand to the Korda siblings (the Hungarians who dominated British cinema) to Hollywood, where he lacked the necessary film directing experience in order to be truly taken seriously. Nevertheless, upon his return to Budapest, he directed five films in a row, in 1939 alone, switching from one style to another, ranging from the crime thriller The Five-Forty to a female-centred chronicle, Two Girls on the Street, a historical biography Semmelweis, named after the doctor who invented asepsis, the melodrama of Wedding in Toprin, or the moral fable Six Weeks of Happiness. These works opened the doors to Hollywood, where he went into exile, like many of his compatriots, amidst the rise of Nazism. De Toth, who often visited the Institut Lumière at the invitation of Bertrand Tavernier and Thierry Frémaux, left us in 2002. It is exhilarating today to revisit his little-known and promising budding career.

In collaboration with the National Film Institute – Film Archive, who restored all the films of the retrospective.

Wedding in Toprin by André De Toth (Toprini nász, 1939, 1h21)
Lieutenant Mányay and his colonel's daughter are in love. Being fluent in Russian, the young officer is sent under a false identity to Count Toprini's house to expose a spy ring... A great success for this first film, mixing romance and adventure.
Cinéma Opéra Tue18 5pm | Villa Lumière Wed19 9:30pm

The Five-Forty by André De Toth (5 óra 40, 1939, 1h20)
Marion has separated from her husband, who continues to exercise control over her. Her former fiancé, Henri Tessier, is investigating the murder of an opera singer; her husband is a suspect... The first Hungarian thriller, it was awarded the prize for the most avant-garde film at the Venice Mostra.
Institut Lumière Tue18 2:15pm | UGC Confluence Fri21 10:45am

Two Girls on the Street by André De Toth (Két lány az utcán, 1939, 1h24)
Two women who have fled their village meet in Budapest and move in together... A precursor of Hungarian film noir melodramas, the movie tackles social problems, harassment and the struggle of women for independence and emancipation.
Cinéma Opéra Mon17 5pm | UGC Confluence Thu20 11:15am

Six Weeks of Happiness by André De Toth (Hat hét boldogság, 1939, 1h16)
Gábor is a professional burglar, unbeknownst to his daughter, who believes he is a businessman. When she meets a student who is robbed of his university fees. Gábor’s actions lead them down a different path... A wonderful thriller, a mélange between a love story and the tale of a robber's misfortunes.
Pathé Bellecour Mon17 7:30pm | Cinéma Opéra Fri21 7:15pm

Semmelweis by André De Toth (1939, 1h18)
Patients in a Vienna clinic are dying of puerperal fever. Semmelweis, an obstetrician, discovers that it is due to a hygiene problem, contrary to the opinion of the scientific community... A progressive and enthralling film that plunges us into 19th century medicine.
Lumière Terreaux Tue18 11am | Institut Lumière Thu20 9:15am