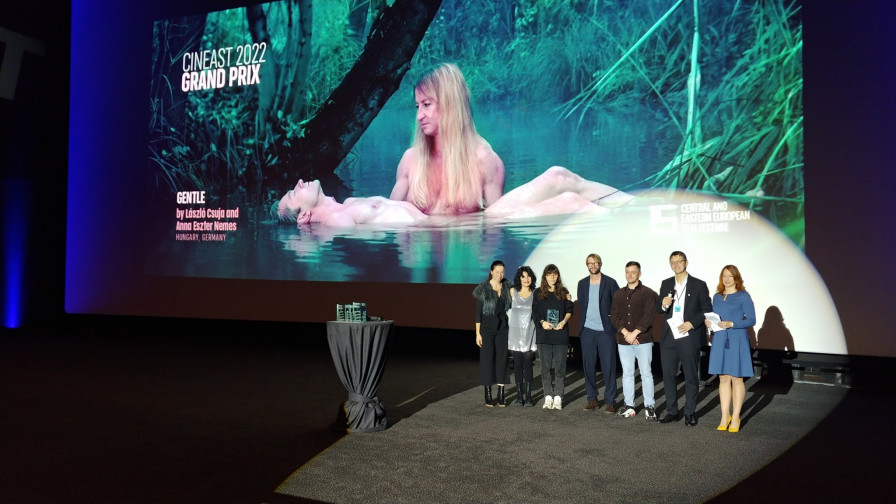 The 15th CinEast Film Festival ended with double Hungarian success in Luxemburg where some of the most exciting movies of Central and Easter European filmmakers were presented between 6 and 23 October.

The body melodrama of László Csuja and Anna Nemes is about a female body builder, who has to make serious sacrifices to fulfil her dream and become a world champion. She falls in love with a mysterious man, which makes her realize that it’s not only her body which deserves special care, but her soul, too.

The CinEast jury commented on their decision regarding the Grand Prix winner GENTLE as follows: “Through a very tender and patient observation the director opens a door to a universe we know very little of, to a character we have rarely seen on the big screen. This is a film that challenges our notion of beauty and proposes another kind of beauty, and without judgement, you fall in love. Minimalistic and precise, its careful and efficient editing style keeps you on your toes, needing, wanting more.”

GENTLE, a Hungarian-German coproduction, supported by National Film Institute - Hungary, premiered at Sundance Film Festival in January, becoming the first Hungarian film selected for the competition at the prominent event and was  later screened at prestigious Sydney Film Festival as well. GENTLE was awarded Best Central and Eastern European film at Cleveland IFF and at GoEast Festival, Wiesbaden, Germany, creators László Csuja and Anna Nemes received best directing award from the professional jury. A Special Mention was awarded to the actress Eszter Csonka for her role in the film at 21st Transylvania International Film Festival (TIFF).

Directed by Ákos K. Kovács, BRANKA won Audience Award for the Best Short Fiction Film at CinEast festival. The short film is set near the Hungarian-Yugoslav border in 1991 and tells the story of Sarajevo nurse, Branka, who works in the obstetrics department of a state hospital. She has to make the most difficult decision of her life when  the chief obstetrician of the department tries to get her to help smuggle newborns out of the hospital, and then make her parents believe that babies sold to foreign couples died shortly after birth. Branka, which received award for best short film at Vukovar Film Festival, was created by Salamandra Film and supported by the Hungarian Media Patronage Program. Producers are Zsuzsi Gyurin and Gábor Osváth.