Today starts the 70th Cannes Film Festival, where four Hungarian movies will be screened as part of the programme. Kornél Mundruczó's latest feature, Jupiter's Moon, is in the competition, György Kristóf's debut feature, OUT, is in the Un Certain Regard section, Áron Szentpéteri's graduation short film, Invisibly, competes in the Cinéfondation section, and Zoltán Fábri's cult movie, Merry-Go-Round, will be screened as part of the Cannes Classics.

A young immigrant is shot down while illegally crossing the border. Terrified and in shock, wounded Aryan can now mysteriously levitate at will. Thrown into a refugee camp, he is smuggled out by cynical Dr Stern, intent on exploiting his extraordinary secret. Pursued by enraged camp director Laszlo, the fugitives remain on the move in search of safety and money. Inspired by Aryan's amazing powers, Stern takes a leap of faith in a world where miracles are trafficked for small change...

Kornél Mundruczó is a Hungarian screenwriter, film and theater director, founder of Proton Cinema and Proton Theatre. 'Jupiter's Moon' is his fifth film to world premiere at the Cannes Film Festival. He previously presented 'Johanna', 'Delta', 'Tender Son' and 'White God', which won the 2014 Un Certain Regard Prize.

Ágoston, a family man in his fifties, sets to wander through Eastern Europe with the hope of finding a job and fulfilling his dream of catching a big fish. He ends up in the Baltics, with nothing but sea-salt and wind behind his collar. His journey pulls him deeper and deeper into a swell of bizarre events to finally meet a friendly woman, a Russian acquaintance with unfriendly intensions and a sad earless stubbed rabbit. Waves spread over the sand, and retreat slowly.

György Kristóf was born in Slovakia in 1982. Quite early in his life, as a teenager, he moved to Hungary to attend high school during which he worked as a journalist in a local daily newspaper. He spent his later student years studying philosophy at University of Miskolc. There, he discovered his interest in films. To pursue his newly-found passion he worked in AD teams of Hungarian films and big American productions. In 2008, he starts film-studies at FAMU in Prague. There he directed a few short films which were invited to over 50 festivals and awarded several times. In 2011, after finishing BA studies, he moved to Latvia, Riga for a year: there he worked as a Director for TV commercials. He came back to FAMU to study at MA degree and finished his first feature film 'OUT'.

OUT by György Kristóf

INVISIBLY by Áron Szentpéteri in CINEFONDATION as his graduation film

Two people meet in the dark. The darkness of an invisible exhibition. Through the film, we follow them as they get closer and move apart from each other by crossing blurry boundaries. Boundaries that exist between and within people and are mostly invisible. Not only for the blind.

In a village subject to serious social change, young Mari Pataki, humble but promising farmer's daughter, is forbidden by her father from seeing her lover. All he cares about is farming, and making a fortune in the future. He decides to marry her off to another rich and old man with whom he's making business. 'Land marries land' he keeps saying, believing the old Hungarian farmers' law to be unchangeable. But the young lover is ready to overcome all obstacles to win Mari's love.

The three-times Kossuth Prize-winner Zoltán Fábri would be 100 years old in 2017. As a film director, he had several banned screenplays, so mainly for political reasons, he had to make literary adaptations, still reaching an audience of millions. He graduated from Fine Arts Academy in 1938 before attending the Academy of Performing Arts between 1938 and 1941. From 1950, he was artistic director of the Film Company and his first film 'Storm' was made in 1952. 'Merry-Go-Round', set in a rural environment, became a milestone in Hungarian film history. He was professor at the Academy of Performing Arts and President of Hungarian Film and TV Critics’ Association. As set designer and painter he also contributed to significant works. 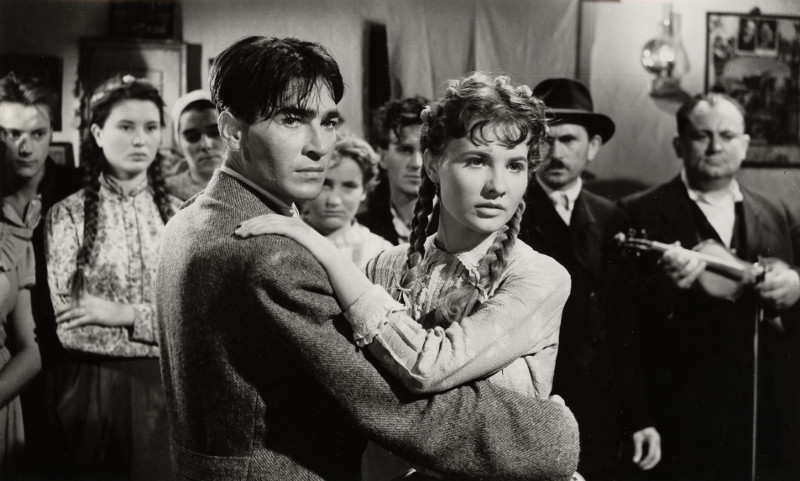