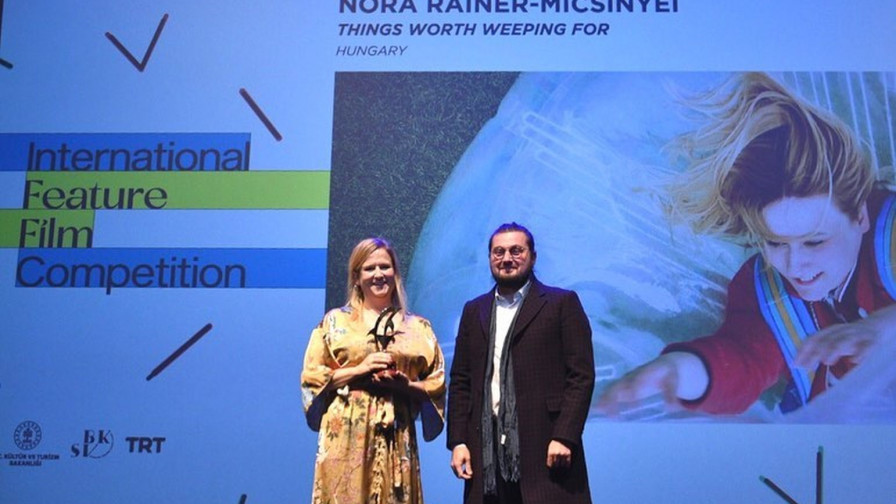 Nóra Rainer-Micsinyei for her portrayal in THINGS WORTH WEEPING FOR and Gusztáv Dietz for WILD ROOTS were awarded at Istanbul’s international film festival this weekend. Both firs features were made in the Incubator Program of the National Film Institute.

Cristina Grosan’s first film Things worth weeping for tells a story of thirties who try to live up to the expectations for themselves and their environment at the same time, while not being able to make the fundamental decisions of their lives. The director co-writes the screenplay with Nóra Rainer-Micsinyei, who is also playing the main character of the film, and won the Best Actress award at the Bosphorus Film Festival. Things Worth Weeping for was produced by Laokoon Filmgroup’s Judit Stalter. Wild Roots is about a heart-breaking and uplifting father-daughter relationship, directed by Hajni Kis. Gusztáv Dietz, the former world champion in grappling martial arts, plays the father, the little girl is played by Zorka Horváth and the film was the first cinematic adventure for both of them. Gusztáv Dietz was awarded the Best Actor by the jury of the Bosphorus Film Festival. Wild Roots was made in a Hungarian-Slovak co-production by Proton Cinema, produced by Júlia Berkes and Balázs Zachar, the executive producer was Viktória Petrányi. The 9th Bosphorus Film Festival was held in Istanbul in the last October week, with only ten films invited to the international competition. Among the guests of honour were established Mexican director Carlos Reygadas and Oscar-winning Bosnian screenwriter-director Danis Tanovic. Nóra Rainer-Micsinyei received the trophy in person, while director Hajni Kis and producer Balázs Zachar took the award on Gusztáv Dietz' behalf at the closing ceremony.