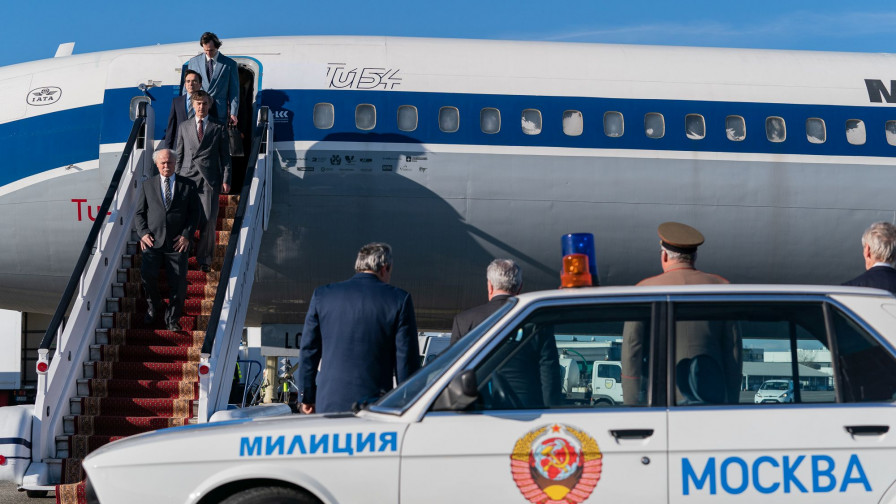 BLOCKADE is the Official Hungarian Entry for the Academy Awards©. A true story of the first democratically elected Prime Minister of Hungary, József Antall, from his freedom fighter days in 1956 to the infamous 1990 taxi blockade that shook the nation. Int’l sales are handled by NFI World Sales.

At the meeting of the Hungarian Oscar Selection Committee, it was announced that Hungary will enter BLOCKADE (directed by Ádám Tősér, writteb by Norber Köbli and produced by Tamás Lajos) to be considered for nomination in the “Academy Awards - Best International Film” category.

A true story of the first democratically elected Prime Minister of Hungary, József Antall, from his freedom fighter days in 1956 to the infamous 1990 taxi blockade that shook the nation.

József Antall, only six months after his induction as Prime Minister of the first democratic government following the 1989 change of the Communist regime, faces the most difficult test of his life.

Taxi drivers protest against the drastic rise in petrol prices by the House of the National Assembly. Quickly disillusioned with democracy, they blockade the city of Budapest, and soon after the whole country. The opposition sides with them and prompt them to start a revolution. The reserved and thoughtful Antall goes head to head with the ever so popular President Árpád Göncz about how they think the situation can be resolved, and their personalities and opinions collide. Both the press and public opinion sympathize with the taxi drivers, and the police force abandons the government, now unpopular due to their disposition.

József Antall, former participant of the 1956 Hungarian Revolution, finds himself on the other side of the barricade. Left alone, newly operated, in a hospital ward, he starts remembering his life as a young history teacher turned revolutionary, and the way he met his wife in the process.

Back in the present, Antall has to make a decision what he should do. He manages to use all the resources he possibly can without hurting the values of the systemic change that just happened in the country, and finds a solution.

Blockade is not only the chronicle of the four days of the taxi blockade: it shows the battles and bargains behind the scenes, and the private life of a Prime Minister dealing with crisis, fighting for democracy.

„This film is special most of all because it is the first one to show the circumstances of the system change following the Socialist era in Hungary, and the political and private life of József Antall, Prime Minister of the first democratically elected government.” - Tamás Lajos, Producer

“As Hungary lives down the last hours of Soviet occupation, through an unexpectedly escalated crisis situation and a human drama, the film tells the story of a society starting to learn that democracy is not only about freedom, but also about duties and taking responsibility.” - Ádám Tősér, Director

“Blockade is the incredible true story of a nation divided and the leader who unites it – while fighting a battle against his worst enemy yet: cancer.” - Norbert Köbli, Writer

Film Positive Productions / Led by Tamás Lajos, Director of Photography and Producer experienced both in local and in international features, Film Positive Productions has started its run by producing commercial content. In 2004, it has shifted its focus to television films, features, and documentaries. Along with its sister company, Szupermodern Studio, Film Positive has produced numerous critically acclaimed television films, including “Trezor”, “Eternal Winter”, “The Exam” and its feature sequel, “The Game”.

Tősér Ádám / Ádám Tősér has been working in film production for over 20 years. He had worked as an Editor, a Producer and an Assistant Director, both in Hungarian and international productions, before he could prove himself as a Director. His latest film is “Kittenberger – The Last Hunt” (2021), which presents the adventurous life story of the world-famous Africanist is an original way. In his 2020 film “Roads Fifty-six”, through personal stories, he shows viewers the fates of 1956 refugees beyond the Iron Curtain. He produced the documentary titled “Strong” (2011), which follows the heroic struggle of alpinist Zsolt Erőss from his leg amputation to his return to the mountains.