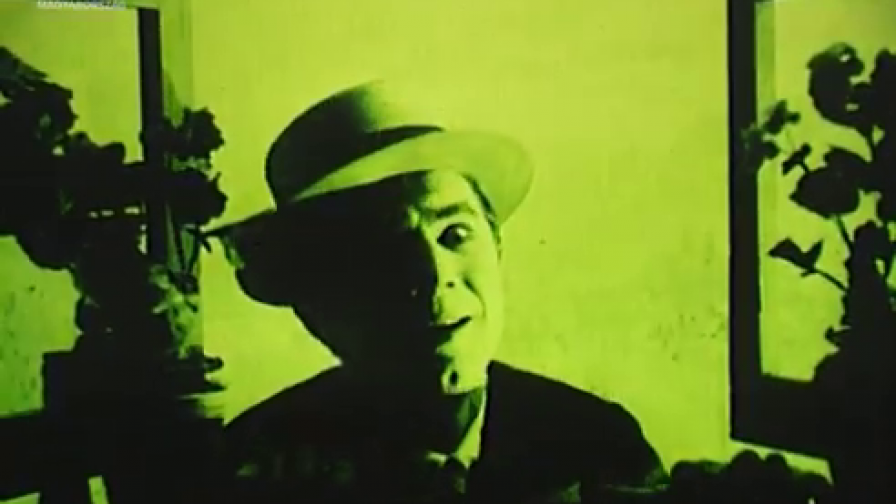 To mark the 140th anniversary of the birth of Béla Lugosi, the world’s best-known Hungarian actor, the NFI – National Film Archive is publishing a fragment of film from the silent work Struggle for Life (Küzdelem a létért) preserved in the Film Archive. All that is left of the 1918 drama is this 50-metre section of film, but even this short strip is extremely valuable because it represents the only surviving Hungarian role played by Béla Lugosi. Béla Lugosi was one of the most important male stars of the Hungarian silent era, although many primarily associate him with his later role as Dracula.

In the short reel, we see a crime, to be exact, a post office robbery being perpetrated. The location is an office of the Hungarian Royal Post Office, where Betty, the postmistress (Ila Lóth), is just finishing up her work with the telegraph and then hiding the safe key under a pillow. In the meantime she is being closely observed by the thief Pál Orlay (Béla Lugosi), who on seeing the girl leave climbs in the window, gets the key, steals the money and escapes. The clip running for barely two minutes is a masterly example of tension building. Cameraman Károly Vass and set designer István Szironthai Lhotka consciously exploit the fore- and background, thus everything occurs in spatial depth. The thief watches the unsuspecting post girl from the window in the background, then on her departure we directly experience how he sneaks into the room and approaches menacingly, moving directly towards the camera. The play of angles represents a crucial part in heightening the tension. The viewer sees both characters; whereas the girl neither notices nor suspects anything, Orlay is watching her every move. The use of light and shade is particularly effective when the man steps from the well-lit outer area into the dark room, thus only the outlines of a stealthily moving figure can be discerned against the light.

The film’s colours are given by a tinting technique applied at the time. In this case the film strip was immersed in green or yellow dye depending on which colour best suited the atmosphere of the given shot. Where the girl is present, presumably working by lamplight, the frames are tinted yellow. The scene is set in the evening as indicated by the wall clock showing the time to be 8.45 pm, when Betty looks up at it and finishes her work. Once she leaves, the lamp is no longer burning and a dark green tint suggests the darkness encompassing the room. During the robbery, only the eyes of the somewhat elegant intruder wearing a hat and carrying a cane can be seen gleaming in the greenish half-light, the demonic character of whom is clearly demonstrated in these few frames.

Struggle for Life (occasionally referred to as Leopárd / Leopard in contemporary press reports) was a Star Film Studio production made in 1918. The story is an adaptation of a play by Alphonse Daudet, which Hungarian audiences were already familiar with from a National Theatre production in 1894. Director of the film was Alfréd Deésy, principal director of Star, who is associated with a string of major international hits. Star, one of the most modern film studios of its day, was located on Pasaréti Road in Buda and in 1918, at the peak of Hungarian silent movie production, no fewer than 25 films were turned out here in one year.

Perhaps it was sheer coincidence, perhaps it was the hand of fate at work, but Béla Lugosi, who at the time was a recognized stage actor, launched his career at Star studio whose logo was a bat. In order to differentiate his motion picture persona from his stage profile, in his early movie roles, thus in Struggle for Life, too, Lugosi appears in the credits under the artist name of Arisztid Olt. Working with Alfréd Deésy, he made a total of seven full-length feature films and one short motion picture, thus it is no exaggeration to say that the director was the one who discovered Béla Lugosi for film. At the time, Lugosi was a member of the National Theatre although he had met Deésy earlier, in his years as an actor in Debrecen. Other than the elderly Richárd Kornay, Lugosi was the only professional stage actor in the Star company, which goes to show that the esteem in which the film acting profession was held fell far short of theatre acting, and it called for a certain entrepreneurial spirit for an artist to branch out in this area.

The premiere of Struggle for Life was held in the Corso cinema (today the site of Pesti Theatre), Váci Street on 22 September 1918. “The Corso’s cultured audience judged the frame wondrously beautiful from the point of view of the interiors, the landscapes and the costumes. The acting was similarly very well received. Everyone took Ila Lóth, in the role of postmistress, to their hearts, Annie Goth was refined and stylish, while Arisztid Olt, Klára Peterdi and Ferenc Virágh played a large part in the success of the piece”, noted Pesti Hírlap. Other commentaries heaped praised on the romantic on-location shots, the sight of the Gothic mansion and palm house, the vivid depiction of pomp and corruption. Although there is no evidence of this in the fragment of film that has survived, we know that filming locations included the park of the Esterházy mansion in old Tata and Deésy’s favourite location, the Dalmatian coast. Contemporary press reviews applauded the fact that social issues and “the labyrinths of human duplicity” also featured in Star films, which in this case were centred around the sociopathic intriguer figure developed by Lugosi.

The film was released in Vienna in February 1919 and reports suggest that distribution rights for the United States were also arranged.

Since during the war Star productions found a ready audience in neutral states, Sweden, Denmark, the Netherlands and Switzerland, and the studio also had representations in the Balkans, Poland and Czechoslovakia, it is quite likely that the motion picture was also screened in these countries.

The original fragment was discovered by Ivo Blom at the Eye Filmmuseum archive in Amsterdam, from where it was brought to Budapest in 1993. Researchers immediately assumed it was Hungarian because of Lugosi, although for a long time they believed it was from Alfréd Deésy’s 1917 adaptation of The Picture of Dorian Gray, The King of Life (Az élet királya). We have Gyöngyi Balogh, Film Archive researcher, to thank for the correct identification.

The NFI – Film Archive has issued an appeal – within the framework of the International Motion Picture Hungarica Research Programme – to film collections all over the world in the hope that the entire film may one day come to light.

Content of the film based on contemporary film reports

Architect Pál Orlay is overseeing renovation of the rural retreat of Princess Viktória. The handsome but unscrupulous man seduces the princess in order to obtain her fortune. The lonely widow falls in love with the architect, who meanwhile is also seducing her pretty companion, Betty. Betty’s father is manager of the local post office and he keeps large amounts of cash locked up in his office. Orlay robs the post office because he needs the money to repay his creditors. The princess reimburses the distressed postmaster. Orlay and the princess marry and her extravagant husband soon squanders his wife’s fortune. At this point he turns his eye towards the wealthy Baroness Matild, but first he needs to get rid of Viktória, who rejects any talk of divorce. At one of the princess’s soirees a scientist gives a lecture on Darwin’s theory and states that there exist people willing to use violence to destroy those weaker than themselves even in civilized, high society. Orlay plans to murder the princess, to which end he secretly adds poison to her glass. However, the lady notices and is shocked to realize what an evil soul her husband has. At this moment the postmaster bursts into the mansion to reveal that his daughter, cheated in love, has committed suicide. The distraught father shoots Orlay, the root of all this tragedy, and the human monster falls dead.