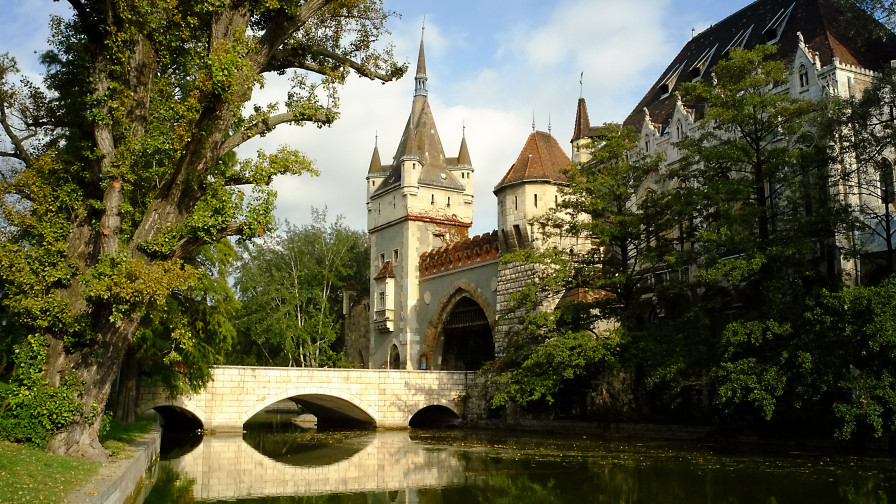 The first stone bridge of the Hungarian capital. It is the most famous structure in the country. It also symbolically connects the elegant Buda and the bustling Pest. At the initiative of István Széchenyi, the "greatest Hungarian," the British designed it and managed its construction. The bridge is a central element of the Danube panorama and a symbol of the city. It is the most photographed structure in the city. It attracts the eye approached from any direction, at all times of the day. The northern step of the Pest bridgehead, which leads to the Danube, is a particularly romantic place. The most elegant avenue in Hungary, an excellent match for the boulevards of Paris, Rome, or Vienna. When constructing its buildings, it was stipulated that one-fifth of the cost should be spent on the exterior. Hundreds of ornate palaces and villas along the avenue give Budapest the status of a metropolis. Here you will find the Hungarian State Opera House, and the first underground railway in continental Europe operates below its surface. The most spectacular urban road in the country. One of the most recommended routes for a motif walk. It provided a worldly scene for many films. A recurring location for car scenes. One of the most characteristic sights of the Buda Castle. Once upon a time, Danube fishermen sold fish caught from the river here, while according to other sources, the fishermen were responsible for protecting this section of the castle. The luminous white limestone monument, which can be seen from many parts of the city, owes its magical atmosphere to the ornamentation evoking the conquering Hungarians, the elegant staircases, and the view offering a magnificent panorama. Those arriving on foot from the city are compensated by a special atmosphere for the steps. The stairs to the Fisherman’s Bastion can often be seen as Paris in movies. Built in the most beautiful era of the railway construction fever, the classic main railway station is the largest one in the country. It is an excellent center of the Hungarian railway infrastructure with its huge central hall, monumental façade, and ornate waiting rooms. A large number of international and domestic trains arriving here, two metro lines, plenty of buses, trolleys, and trams make the railway station and its surroundings the busiest transport hub of the country. Steam locomotives and contemporary wagons often run into the giant train station from the nearby train museum due to filming. It is a bustling Babel that filmmakers can turn into a huge live railroad studio. The Borgias, Spy Who Dumped Me, Gemini Man, The Witcher

A building complex erected in 1896 for the millennium of Hungarian statehood, which merges the details of dozens of structures into a beautiful unit. The mix of Romanian, Gothic, and Renaissance styles gives the place a uniquely romantic atmosphere, in the middle of the most popular park in Budapest, Városliget. Historic, built magic in urban nature. Originally an exhibition built as an attraction, it is also a perfect historical backlot for filmmakers. The irregular oval square is one of the most spectacular parts of Budapest. In addition to its huge trees reminiscent of a park, the space is dominated by grandiose palaces. The monumental, scenic atmosphere is enhanced by a series of historical sculptures and monuments erected on the square. The elegant neighborhood is one of the favorite venues for American filmmakers. Moreover, the building of the US Embassy and the statue of Ronald Reagan are located here. No longer are we surprised that Reagan, a Hollywood actor, became President of the United States. It is one of the largest and most popular spas in Budapest's world-famous spa culture. Water for its outdoor and indoor pools is supplied by several wells. The dome hall decorated with frescoes and mosaics and the spacious, elegant corridors enhance the beauty of the building. The most spectacular part is perhaps the large outdoor pools. The spa is one of the crew members’ favorite leisure destinations on filming holidays. The motif of bathers playing chess in the outdoor pools has been featured in several films. Once upon a time, the markets of the capital were supplied with all kinds of goods from the Public Warehouses on the banks of the Danube. After the turn of the millennium, when the Bálna was built, it became one of the new attractions of the city. Modern parts were added to the former, classic buildings. The building exemplifies not only in its name but also in its form that Budapest is the city of waters. The panorama of the Danube made its entertainment venues and restaurants popular pretty quickly. A building with an interesting view and graphic symmetry. Its futuristic forms and spaces are so unique that it has already been featured here as a space center. Built in the middle of the twentieth century, it was the first airport in the country to meet all needs. The proportionate exterior shape and spectacular interiors of the modernist building stand the test of time to this day. Nowadays, Budapest's international air gate is Terminal 2 of the Liszt Ferenc Airport nearby, but the atmosphere of the renovated, former Terminal 1 building has not lost anything of the unique romance of aviation. We could say that it has been used as a location from the basement to the attic, but the phrase “from the parking lot to the runway” makes more sense. An action filmmakers’ favorite. The Pillars of the Earth, Good, The Borgias, The Witcher

The former royal castle is located in a beautiful natural environment, 65 kilometers from Budapest, on the shores of the Old Lake of Tata. The history of the fortress dates back to the fourteenth century. The monument, which bears a mixture of different ages and styles, is a fascinating example of the harmony of built heritage and nature. Komárom-Esztergom county boasts one of the highest numbers of filming locations in Hungary. Located in the heart of the region, the magical castle is the cinematic center of the area. Sopron, located near the Hungarian-Austrian border, boasts an almost untouched old town of medieval origin. The ancient streets and several monuments of the Castle District give a fabulous atmosphere not only to the whole settlement, but also the area full of cultural and natural peculiarities. The special atmosphere has irresistibly lured filmmakers to the city for decades. We are letting you know now that if you shoot a historical film, Sopron will be a very strong venue option.